It’s the first Wednesday of the year and our regular club run is back after a short Christmas break.

We will be meeting at our usual location at the beach shelter nearest to the entrance to the King Alfred Leisure Centre car park at 7pm.

Tomorrow’s run will be an out and back. We will match similar runners together to run as a group and there will always be a back marker to ensure you don’t come last.

New to us? Come along 5 minutes early so we can you registered with us.

With our Wednesday runs now over until 2nd January 2019, here are your handy tips to keep running over the festive break:

If you’re hanging up your trainers until the New Year – we look forward to seeing you in 2019!

Thinking of joining our January 2019 Beginner’s Group? We only have a few places remaining!

Our beginners group is for gay, lesbian, bisexual, trans and queer (LGBTQ+) people who would like to build the confidence to run 5km continuously without stopping. You can read more about our Couch to 5km Beginner’s Group here.

If you have already signed up, you should have received your first welcome email with information about the group. If you haven’t please check your junk mail folder.

Numbers on our Beginner’s Group are limited to ensure there are enough volunteers to support all new runners. We expect all places to go before the New Year, so if you are interested in joining, make sure you sign up as soon as possible. Once all spaces are taken we will be starting a waiting list.

Already can run 5km confidently? Why not join our Wednesday night club runs – our next run will be Wednesday 2nd January.

As the last one of the year, rather than our normal club run, we will be mixing it up with some fun running games along the promenade. Meet as usual at 7pm at the Beach Shelter on Hove Street, entrance to King Alfred Car Park.

We will be having informal Christmas drinks after the run. All welcome.

Our normal club runs will be back on 2nd January 2019.

Several FrontRunners turned up in their best Santa wear, with bespoke Rainbow Hats made by our own member Jen, to run 5km and raise funds for Rockinghorse, a Sussex charity funding vital medical equipment for sick and ill children.

A couple of FrontRunners even had time to do the Hove Prom Parkrun before donning their Santa suits. Well done to all runners!

You can donate to Rockinghorse by clicking here

Update: we also received a mention in The Argus write up of the day. 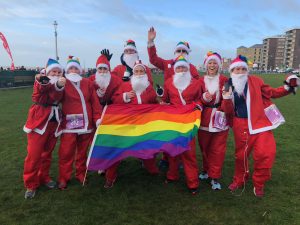 As the winter draws in, with even darker evenings, a number of running groups are taking advantage of the well lit promenade around the King Alfred to train and run on a Wednesday night.

We meet under the promenade “bus shelter” closest to the King Alfred Leisure Centre car park, located on Hove Street on the Beachside of the road. Look for the Pride flag. 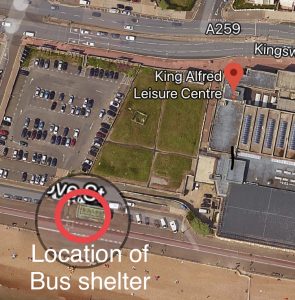 If you are driving, parking is free on either Hove Street or in the King Alfred Leisure Centre car park after 6pm.

Where to get ready?

Lockers require a £1 coin, which is refunded.

For our winter runs we are staying on the promenade and heading towards Brighton, making best use of the street lighting. Before setting off we will group similar speed runners together. If you haven’t run before or not sure what speed you run, don’t worry we can figure it out in the first part of the run and there is always someone at the back who will make sure you aren’t last.

We run in all weathers, so come dressed appropriate to the weather. We recommend a windproof running jacket as we are running along the seafront. There are a number of specialist running and sports shops in central Brighton and central Hove, and a number of the discount supermarkets also sell running gear at this time of year.

Brighton and Hove FrontRunners is now affiliated with International Front Runners. Our affiliation was agreed at the latest IFR general meeting, which took place just this week.

BHFR is the latest club to be affiliated from the UK, joining London, Birmingham, Manchester, Leeds, Newcastle, Glasgow and Edinburgh to bring the total number of UK affiliated LGBT running clubs to nine.

Getting into the festive mood, BHFR members are taking part in Brighton’s annual 5k Santa Dash. The Santa Dash is a fun non-timed event to raise money for Rocking Horse, a Brighton based charity supporting unwell and sick children in Sussex, where participants run the course dressed up as Santa Claus.

Members are going to be running in Rainbow Santa Hats to add a Pride-spin to the dash and make sure they stand out amongst all the Santas! Request your Rainbow Santa Hat via our Facebook Event Page.

Our monthly postrun social will take place Wednesday 28th November, just a few minutes away from the King Alfred Leisure Centre at The Better Half, Hove.

We have an area reserved from 8pm.

We have free use of the King Alfred lockers and changing facilities for anyone wanting to change after the club run.

For anyone thinking of running with us, the social is an ideal time to come down and meet some of the group and get to know us.

The first race with BHFR and I’ve volunteered to write the race report – obviously a sucker for homework!

I thought I had entered the Brighton 10K before, but then it occurred to me that I had the best of intentions a few years ago and never actually committed so despite running along the seafront several times, this was going to be my first Brighton 10K. I only signed up after becoming a BHFR member so maybe it’ll be the start of a new tradition.

I can’t say I was overly prepared, I hadn’t ran more than 7km after a truly gruelling London Marathon back in April making sure I stuck to the shorter distances. Even then, following a new addition to our family in the summer, most my running has been limited to running with a buggy, so I’ve completely forgotten how to use my arms.

My preparation on the day didn’t go that great either. After repeatedly forgetting the start time (and having to ask fellow BHFR members a couple of times), there was a planned group photo at 9am outside Charles Street, with some London Frontrunners who were also entering. My bus disappeared from the live tracker, a regular occurrence on Brighton Buses, forcing me to run 1km down to the next bus route so I ended up missing the photo call by a few minutes, but at least now I was warmed up. Note to self, maybe I should cycle to start of future races.

Thankfully, the organisers were better prepared than I was. A bitter cold morning meant no one was willing to drop bags until the last minute but there was enough marshalls to cope with the demand. After catching up with a few fellow BHFR peers, 9 of us were signed up to start the race, we set off to our relative starting pen.

I decided just as I started I wasn’t going to look at my watch for the duration of the course, time checking every kilometre seems to make me get all up in my head and either stress about running too fast or too slow. At the end of the day, I was starting with people expecting a similar time, I’ll just run alongside them and enjoy the run.

So we we’re off, running towards Hove on closed roads (also another plus). Once my limbs were warmed up the chill had dropped off, and I was super glad that I grabbed my sunglasses on the way out as the sun was blaring down. This maybe was going to be a good run after all.

There was a huge temptation to look at my Garmin every time I heard it beep at a kilometre marker, especially as we hit 5 kilometres, but I resisted and I was just enjoying the run for what it was. This was going very well.

The course looped back just before the King Alfred, putting us on the beach promenade, where the wind picked up a little and started to feel a chill. Once we looped past back the peace statue we were back on the road, where there seemed to be a giant inflatable duck running the other way. The Brighton 10K is also the Vegan Runners championship race, so not only were they out in force, they had also brought along a couple of inflatable animals to run the course with them. I spotted a duck and a fish (or was it a shark?), it definitely made the run more interesting.

Just outside the Grand Hotel, the BHFR Cheer Squad were there with Rainbow banners and flags – having someone cheer you on gives you such a massive boost. So after a quick wave back it was back to the running with a massive smile on my face.

At the 7km mark, you run past the finish, where the elite runners were already approaching the finish line. I always find it amazing how effortless these elite runners look when they’re going at the speeds they run out. My partner is always quick to remind me that I look like a giant tomato when I run, so I am quite envious of anyone who can run without looking that they’ve broken out into a sweat. The envy soon passed, as I realised I still had 3km to go and the wind was starting to pick up.

At the 8km marker I was starting to find I was running out of steam, with a couple of runners taking over. Someone shouted how much time had passed, just before the turn back point. I think I heard 37 minutes, but I convinced myself I heard wrong, as that would mean I was going ridiculously fast. I then hit the 9km marker and heard my watch bleep. I ended up looking at it, it was an instinctual reaction. I saw that it said 37 and a half minutes. Although I was super pleased at the time I was doing, I was really annoyed with myself for looking and I automatically started debating whether I should drop back given I was going “too fast”. In the end I decided that although I was tired the quicker I ran the quicker it was over (sound logic) but for the first time in the race I was starting to feel tired and the enjoyment slipped. The wind picking up had definitely taken it out of me.

At 300 metres, I could see the finish, so that kept me going – where I crossed in 41:44 – my second fastest ever 10km. I was super pleased with the result. It seems that running with BHFR has had a positive influence!

The good organisation continued and I had my bag in seconds, quickly layering up before meeting the rest of the BHFR squad for brunch.

Overall a really enjoyable run and a great result. In future I’ll be ditching the watch, running more with the buggy and ensuring that all future races has a BHFR Cheer Squad!

By the Beach Shelter

We are an inclusive bunch; all sexualities and gender identities are celebrated.